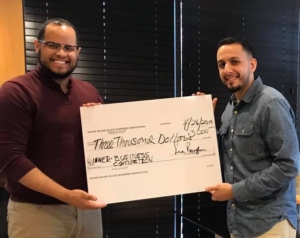 Papi’s Coquito started as a hobby bringing coquito, a coconut liquor beverage that originated in Puerto Rico, to the homes of friends of families. Victor Regino, one of the founders, wanted to find a way to keep his grandmother’s recipe alive, and began making this special drink for his friends. It became so in-demand that he eventually realized he had to find a way to monetize it. That’s where Luis Olmo, an accountant and old friend of Victor’s came in to help him in that effort.

Victor and Luis worked together to lay out the plan for getting the business off the ground and were well aware that in order to get things going, they needed funds. Starting a liquor business is no small feat and would require significant financial investment. Historically, it hasn’t been easy for Black and Latino businesses to get access to capital, so they decided to try something unconventional and enrolled in RIBBA’s Business Plan Competition. Papi’s Coquito was one of three winners and was awarded a $3,000 micro-loan. With that funding, they were able create an LLC, purchase merchandise, and develop and distribute samples to new marketplaces outside of the Latino community where coquito originated.

As they navigated getting their business license, they realized they’d need an even larger loan to apply for that license and further launch the business. The $3,000 loan helped Victor and Luis build credit as they applied for a significantly larger loan and were eventually approved.

Papi’s Coquito will be launching out of Pawtucket as a wholesaler liquor beverage and will supply their coquito to liquor businesses throughout the state. They have an upcoming state hearing that is one of the final pieces to their official release this Spring. To stay up to date on the product and it’s launch, check out their website, Instagram, or Facebook.