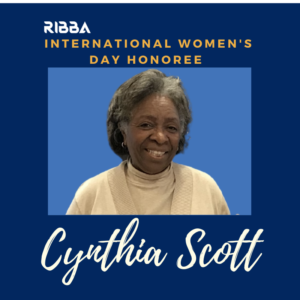 As Women’s History Month approached, the team at RIBBA didn’t have to deliberate much about who to honor and spotlight this year. Cynthia Scott has been a volunteer and Board Member with RIBBA for many years. She’s supported the organization in a variety of capacities, focusing intensely on ways to support and grow Black businesses.

This spotlight isn’t to expand upon her work with RIBBA, though it’s deep and full of stories and accomplishments, but to shed light on her journey and commitment to fighting for equality and justice over the years.

Throughout Cynthia’s adult life, she has been a fierce advocate for issues that affect workers and marginalized individuals and families. During her early years in Boston as a newly graduated artist in the early 1960’s, she quickly understood that the advertising and design job opportunities that were available to White Men, would not be extended to her. As she searched for a way to fight this oppressive system, she joined Boston Congress of Racial Equality (CORE), an organization that played a pivotal role in the civil rights struggle in Boston and elsewhere. While working with CORE, she protested widespread worker discrimination, served as chair of the housing committee, organized rent strikes, and continued to challenge discrimination and corruption.

Cynthia went on to attend the Florence Heller School for Social Policy and Management at Brandeis University where she earned a Master’s degree while completing all coursework toward a PHD outside of the dissertation. Based on research for her dissertation, The Status of Black Working Women, Cynthia developed an upward mobility program housed at the Roxbury unit of the Boston YWCA. Under a contract with what was then the First National Bank of Boston, the program focused on preparing black women working at the Bank in entry level jobs for promotional opportunities within the Bank.  Also, while studying at Heller School, Cynthia took the job that would launch her into her post academic career – workforce development.   Working as the Director of Planning for the CETA division of the USVI Dept of Labor, Cynthia was responsible for oversight and delivery of technical and program services to state workforce development agencies in Massachusetts, Connecticut and Rhode Island.  Over the next 23 years, Cynthia held professional positions managing, directing and designing employment and training programs at federal, state and local levels including serving as Director of Planning for the U S Virgin Islands Department of Labor.

In addition to her very impactful professional career, Cynthia sustained her interest in art and has exhibited solo and in group shows in Chicago, Philadelphia, Richmond and in and around Boston.  She is a founder of the New England Women Artists of Color Association (NEWOCA) and has mounted numerous exhibitions of women’s art in the Boston area and several exhibitions in Rhode Island.

In 2002, Cynthia relocated to Rhode Island upon retiring from her position as the Director of Grants at Roxbury Community College. In 2003, she began to work for change in Rhode Island as she’d done for every other place she’d live before this.

Throughout her personal and professional life, Cynthia Scott has not stopped fighting for equal opportunity for marginalized communities. We honor her this Women’s Month and thank her for her dedication and hard work over the last 50+ years. Cynthia Scott is not only a trailblazer, but an avid advocate for justice.